Polish Biodiversity Information Network was founded by the Ministry of Science in 2003 and was financed by governmental grant from 2005 to 2008. Until 2008 it was working as a network of international cooperation with the basic task being the cooperation with GBIF. Its main goal was to open national resources of biodiversity information and to implement standards for storage and exchange of data. Based on technologies used in GBIF, the system was launched for exchange of data with the global network.

During several years majority of technical solutions for exchange of data with GBIF were tested. The current system, approved by all the PolBIN members, uses TAPIR protocol, replacing formerly used DiGIR i BioCASE as a tool for publishing data in the GBIF system.

PolBIN was also working in the field of increasing knowledge of biodiversity and supporting the members in storage and analysis of biodiversity data. A significant part of data held by cooperating institutions was transformed from analogue (paper catalogues, herbarium sheets, labels etc.) into digital form in databases that may be presented over the Internet. 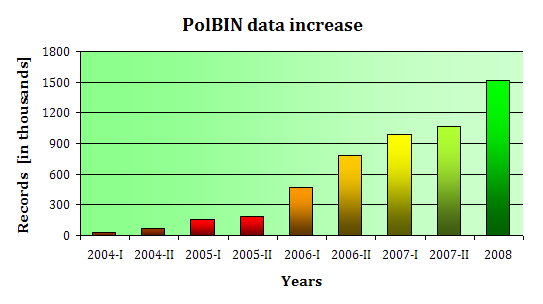